[ Back to Spirit Index ] 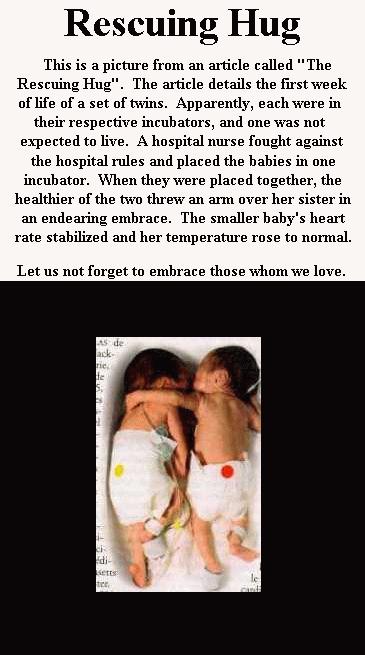 The Many Stories of The Rescuing Hug
~~~~~


A Sister's Helping Hand
Who can measure the special bond of twins?
by Nancy Sheehan

Heidi and Paul Jackson's twin girls, Brielle and Kyrie, were born October 17, 1995, 12 weeks ahead of their due date. Standard hospital practice is to place preemie twins in separate incubators to reduce the risk of infection. that was done for the Jackson girls in the neonatal intensive care unit at The Medical Center of Central Massachusetts in Worcester.

Kyrie, the larger sister at two pounds, three ounces, quickly began gaining weight and calmly sleeping her newborn days away. But Brielle, who weighed only two pounds at birth, couldn't keep up with her. She had breathing and heart-rate problems. The oxygen level in her blood was low, and her weight gain was slow.

Suddenly, on November 12, Brielle went into critical condition. She began gasping for breath, and her face and stick-thin arms and legs turned bluish-gray. Her heart rate was way up, and she got hiccups, a dangerous sign that her body was under stress. Her parents watched, terrified that she might die.

Nurse Gayle Kasparian tried everything she could think of to stabilize Brielle. She suctioned her breathing passages and turned up the oxygen flow to the incubator. Still Brielle squirmed and fussed as her oxygen intake plummeted and her heart rate soared.

Then Kasparian remembered something she had heard from a colleague. It was a procedure, common in parts of Europe but almost unheard of in this country, that called for double-bedding multiple-birth babies, especially preemies.

Kasparian's nurse manager, Susan Fitzback, was away at a conference, and the arrangement was unorthodox. But Kasparian decided to take the risk.

"Let me just try putting Brielle in with her sister to see if that helps," she said to the alarmed parents. "I don't know what else to do."

The Jacksons quickly gave the go-ahead, and Kasparian slipped the squirming baby into the incubator holding the sister she hadn't seen since birth. Then Kasparian and the Jacksons watched.

No sooner had the door of the incubator closed then Brielle snuggled up to Kyrie - and calmed right down. Within minutes Brielle's blood-oxygen readings were the best they had been since she was born. As she dozed, Kyrie wrapped her tiny arm around her smaller sibling.

By coincidence, the conference Fitzback was attending included a presentation on double-bedding. This is something I want to see happen at The Medical Center, she thought. But it might be hard making the change. On her return she was doing rounds when the nurse caring for the twins that morning said, "Sue, take a look in that isolette over there."

"I can't believe this," Fitzback said. "This is so beautiful."

"Of course we can," Fitzback replied.

Today a handful of institutions around the country are adopting double-bedding, which seems to reduce the number of hospital days. The practice is growing quickly, even though the first scientific studies on it didn't begin until this past January.

But Heidi and Paul Jackson don't need any studies to know that double-bedding helped Brielle. She is thriving. In fact, now that the two girls are home, they still steep together - and still snuggle.


Premature babies who survive are tiny miracles of modern medicine. Kyrie (red dot) and Brielle Jackson are also examples of a far more primitive science, that of the loving touch. Born 12 weeks early, the twins were whisked into separate incubators.

Kyrie, the larger at two pounds three ounces, slept peacefully. But Brielle had breathing and heart-rate problems, didn't gain weight and fussed when anyone tried to comfort her. Finally, a nurse tried a technique called "double bedding" and put the sisters together fro the first time since they shared a womb.

"Brielle snuggled up to Kyrie," reports mom Heidi Jackson, "and she calmed right down."

With her sister near, Brielle began to thrive. Sooner then expected, the girls went home - where they now share a single crib.