[ Back to Spirit Index ]

This story is about a bowl.

A bowl - waiting to be filled.

If what I have just written makes no sense to you, I am not surprised.

If I had known in the beginning what I was looking for, I would not have written this story.

I had to trust there was a reason I had to write, and I didn't have to have it all figured out in order to begin.

I would find what I was looking for along the way.

Excerpt from: Chapter One - How it Began

The day I hear that Plain and Simple had made the New York Times best seller list I happened to meet a good friend at the vegetable store. Glowing, I told her the remarkable news. It seemed like a miracle.

"What number are you?" she asked, her voice showing neither delight nor wonder.

For a moment, I didn't even know what she was asking.

Then I realized she wanted to know what position I had on the list. That was one of those moments when everything stops and a space opens up. In that instant I could see that in this world nothing I did would ever be enough.

I was still anxious. I was fifty-eight years old and did not want to spend my remaining years feeling this way. Something was still missing, something more that I should be doing so I could feel good about myself and the life I was leading. Even this achievement, far beyond anything I had ever expected or dreamed possible, could not silence that critical voice.

EVERYDAY SACRED appeared one day in my mind's eye, in sure, bold letters, like one of those blinking restaurant signs. I didn't even know what everyday sacred meant, but I knew it would be the title of my next book.

Two years went by and I didn't write a word.

Then on a day when I was feeling particularly discouraged, another clear image appeared:

I had read M. C. Richards's Centering years before. It was a book about clay and art and life. In it, Richards described Jean Genet, the French playwright, who had said he wanted to roam the countryside like a monk, holding a begging bowl, having filled it with what he needed for the nourishment in his life.

It was obvious to all who knew me that I wasn't a monk, and the very idea of begging would make most of us uncomfortable. In spite of that, the image of a begging bowl reached out and grabbed my heart.

All I knew about a begging bowl was that each day a monk goes out with his empty bowl in his hands. Whatever is placed in the bowl will be his nourishment for the day.

I didn't know whether I was the monk or the bowl or the things that would fill the bowl, or all three, but I trusted the words and the image completely.

At that moment I felt most like the empty bowl, waiting to be filled.

I turned on the computer, hoping to write, but no words came. With the computer still humming, I walked, practically galloped downstairs to the studio and opened a twenty-five-pound bag of clay, ready to make my first begging bowl. The moment my hands touched the clay, I remembered a wise and wonderful statement that M.C. Richards had made many years ago:

"It's not pots we are forming, it's ourselves."

Like the monk going out with his empty bowl, I set out to see what each day offered.

I began noticing, the way an observer might, what I was doing - all my thoughts, feelings, and experiences that might be connected to everyday sacred.

Somehow, in some way not yet shown to me, I felt there was a connection between EVERYDAY SACRED and the BEGGING BOWL.

I looked up sacred in the dictionary and found: "entitled to reverence." Close by was sacrament: "a practice that is considered especially sacred as a sign or symbol of a deeper reality."

I wanted to see with fresh eyes.

What might have been there all along that I had not been able to see? What had I taken for granted?

When I began looking, I found teachers everywhere. Some were officially designated "wise people." Others were not, but were equally wise. Memories from the past reappeared, fresh. Objects reached out with lessons to teach.

I learned from everything and everybody.

What follows are the stories, the people, and the experiences that filled my bowl - a connect-the-dots record of my search for the sacred in everyday life. 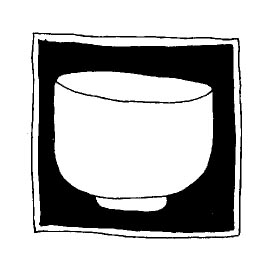 I visited a friend and saw on her wall strong and powerful Japanese calligraphy written on beautiful handmade paper.

"What does it say?" I had asked, stuck by its beauty.

EACH STEP IS THE PLACE TO LEARN.

Excerpt from: Chapter 4 - Searching For Order

One afternoon I bumped into my friend Mel, a Zen priest, dressed in blue jeans and a plaid shirt, looking very much like everyone else shopping for vegetables at our neighborhood market.

He asked how I was, and I told him about the Overflowing Tea story I had written that morning.

Before he had a chance to answer, I added, "And the image of my new project is a begging bowl. Can you tell me anything about begging bowls?"

"Oryoki," he said (the Japanese name for a begging bowl) "means 'just enough'."

Somewhere between the image of an empty bowl that made me feel peaceful and the too much that was driving me crazy, was a moderate, balanced space of JUST ENOUGH.

What is the path from Too much to Just enough? I began to wonder.